I’ve been in for the last couple of weeks doing background research into the Portuguese exploration of the world. Whilst there I picked up a magazine with an old photograph of an elephant in a procession, which reminded me of the elephant the Portuguese once sent to the pope. 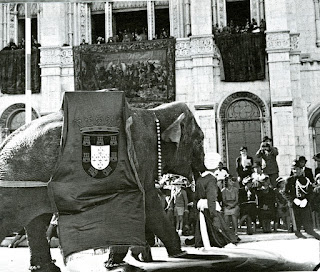 In 1514, King Manuel II of sent Pope Leo X an Indian elephant. It’s interesting to speculate on the process of shipping an elephant on a sailing ship from in the sixteenth century. I guess it would have been winched on board, and somehow restrained in a hold for the long sea journey – 12, 000 miles and six months – and fed on what? As the elephant was accompanied by its Indian mahout it must have been in expert hands. Moving animals about on ships has always been something of a problem – the crusaders suspended their warhorses in slings so that they could roll with the movement of the ship, but elephants are a different proposition. (There’s an account of a celebrity elephant in Europe in the late fifteenth century being carried to England in a ship and being thrown overboard when it became a liability in a storm.)

The Portuguese elephant was especially dramatic. It was white in colour – and Manuel, who knew a thing or two about propaganda, contrived a wildly exotic advertisement for his country's discoveries in the . He despatched the elephant to under the command of his ambassador, Tristão da Cunha, the navigator and explorer. In March 1514 a cavalcade of 140 people, including some Indians, and an assortment of wild animals – leopards, parrots and a panther – entered watched by a gawping crowd who had never seen the like of it before. The elephant carried a silver castle on its back with rich presents for the pope, who christened it Hanno, after ’s elephants in .

At the papal audience, Hanno bowed three times and amused and alarmed the cardinals of the by spraying the contents of a bucket of water over them. He was an immediate animal star – painted by artists, memorialized by poets, the subject of a now-lost fresco and a scandalous satirical pamphlet ‘The Last Will and Testament of the Elephant Hanno’. He was housed in a specially constructed building, took part in processions and was greatly loved by the pope. Unfortunately Hanno’s diet was probably not up to scratch and he died two years after his arrival, aged seven, having been dosed with a laxative laced with gold. The grieving Leo X was at his side. He was buried with honour.


Even less fortunate was Manuel’s follow-up gift – a rhinoceros – dispatched from in a green velvet collar. The ship was wrecked off the coast of in 1515. The animal drowned and was washed up on the seashore. Its hide was recovered, returned to and stuffed. Albrecht Dürer saw a letter describing the stuffed creature, and possibly a sketch. He produced his famous print without ever having seen a rhino – not a bad attempt under the circumstances.

The old photograph I saw in the Portuguese magazine dates from a celebration of the Portuguese world in 1940, in which Hanno’s entry into was re-enacted in Lisbon.

Posted by Roger Crowley Historian and Writer at 23:39