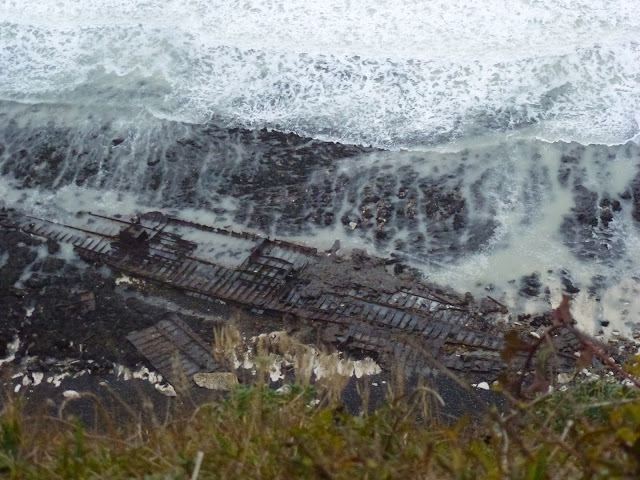 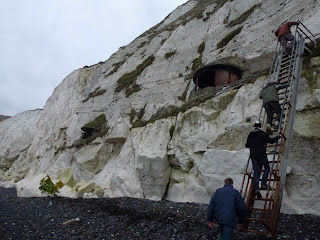 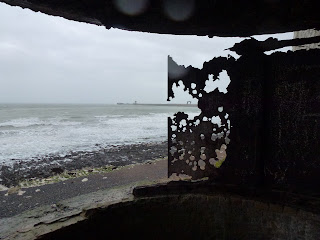 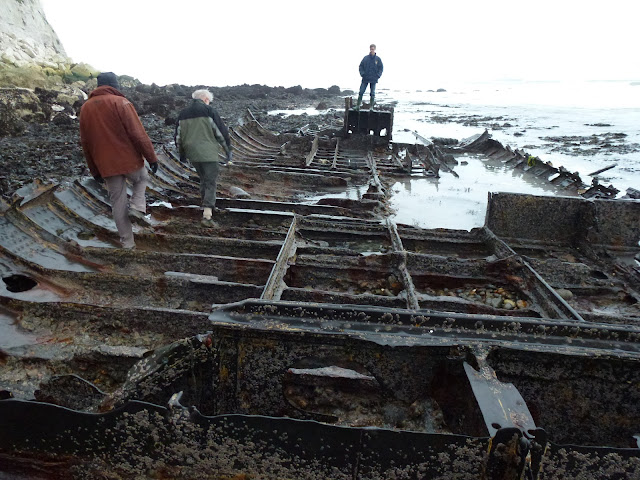 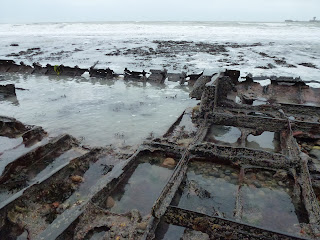 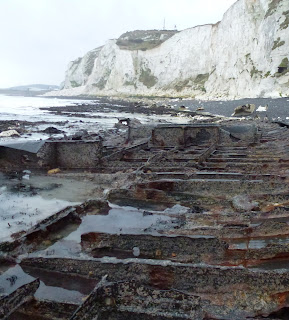 These are the durable remains of the SS Falcon. Carrying a volatile cargo of hemp and matches to in 1926, it caught fire and was beached in the bay outside the harbour. Amazingly there’s film footage of the ship on fire and the crew’s rescue by the lifeboat.
Posted by Roger Crowley Historian and Writer at 05:54 3 comments:

The wettest place on earth

The days before Christmas in the English countryside have been dreary with continuous rain and low cloud, so that twilight seems to fall at about two in the afternoon. It has a charm all of its own - the point when the year shrinks back to its source and there is nothing more pleasurable than to draw the curtains as night falls, turn up the heating and settle to a book. The book, in my case, has been Chasing the Monsoon by Alexander Frater, a traveller's account of tracking the monsoon day by day across the Indian subcontinent as it travels north. It's a time of anxiety and rejoicing - anxiety that the monsoon might fail or be insufficient - rejoicing that when it does come, in full force, it ends the insufferably hot months, stirs new smells from the dust and fertility from the earth.

Frater followed the monsoon in all its manifestations and his quest ended in the town of in the far east of , which receives its rain from the , and lays claim to being the wettest place on earth. This was perhaps the most mournful posting in the British Raj - unless you were a keen botanist with an interest in mosses, ferns and orchids - which many medical men and colonial administrators were.

In 1850 a doctor called Joseph Hooker spent the monsoon months in the town. He called it 'as bleak and inhospitable as can be imagined' - its climate certainly got to the British. (Frater visited the mournful British graveyard and spotted a number of tombstones with the words 'Died by His Own Hand’.) Hooker was astonished by the absolute and continuous deluge that bombarded the town during the months of his visit. He noted the recordings of a previous resident, Mr Yule:

" who stated that in the month of August, 1841, 264 inches of rain fell, or twenty-two feet...Dr Thompson and I also recorded thirty inches in one day and night, and during the seven months of our stay, upwards of 500 inches fell, so that the total annual fall perhaps greatly exceeded [the] 600 inches, or fifty feet, which had been registered in succeeding years."

Posted by Roger Crowley Historian and Writer at 10:18 2 comments:

The giant carrots of Beypazarı

The wonders of Turkey…When I was in Istanbul in October I was introduced to a mention of the carrot town of Beypazarı in central Turkey, by Mary Isin who is an authority on Turkish heritage vegetables.

Beypazarı is the carrot capital of – probably the carrot capital of the world. Over half the country’s carrots are grown in the area. They hold an annual carrot and stew festival here and have many and ingenious culinary uses for carrots, including carrot ice-cream and carrot-flavoured Turkish delight. 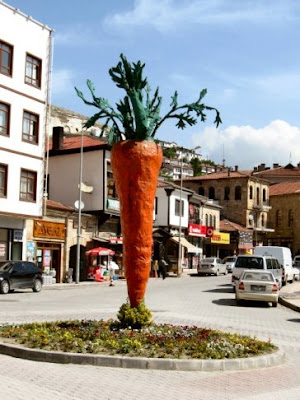 Nowadays the farmers tend to grow Dutch carrots, but what caught my attention were rumours of the almost extinct giant carrot – the historical mega-carrot – once grown in the area. Mary went to investigate and to acquire some seeds – and sent me this picture of the mighty vegetable. These are, apparently, quite average specimens – they can grow to over a metre in length… 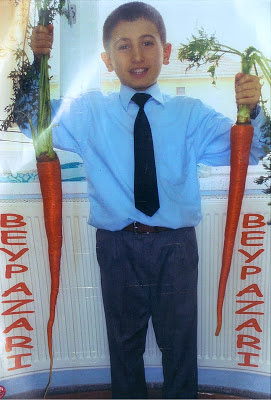 Mary is also a historian of Turkish and Ottoman food who has just written the definitive book on the history of Turkey's love of puddings: Sherbet and spice : the Complete Story of Turkish Sweets and Desserts – part recipe book, part cultural history of a deep tradition that could produce, and I quote, ‘One hundred sculpted sugar lions, baklava the size of cartwheels a thousand layers thick, halva made in memory of the dead, rose jam in a hundred pots of Dresden china, violet sherbet for the sultan and parrots addicted to sugar…the stories behind Turkey's huge variety of sweets and puddings, valued not only for their taste but as symbols of happiness, good fortune and goodwill, are as fascinating as their flavour.’ Cultural and gastronomic history from the land of the giant carrot!

On the cover, the float of the guild of sugar merchants is being pulled along in one of the flamboyant Ottoman processions in Istanbul, sugar piled high on the shelves, and in the cage the sugar-loving parrot which, Mary tells me, was the guild's symbol. 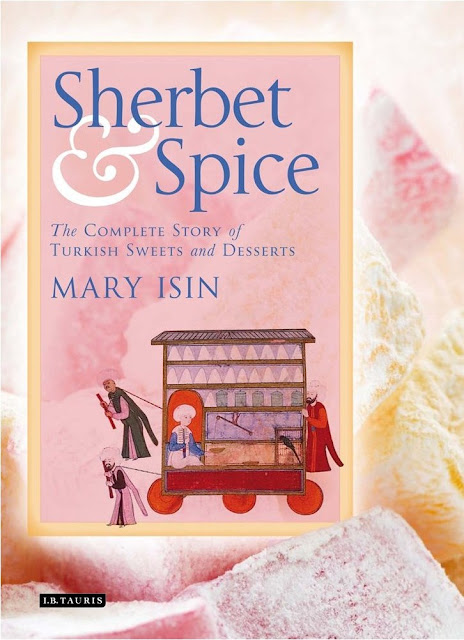 Posted by Roger Crowley Historian and Writer at 05:14 1 comment:

How to catch a leopard 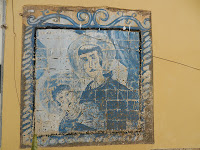 Looking back through some photographs I took in during the spring I was charmed and delighted to remember my visit to the National Museum of Azulejos. Azulejos – from the Arabic for ‘small stones’ – are the decorative tiles that are a distinctive feature of Portuguese art and architecture, visible everywhere - in churches, on the facades of buildings, cafes and public spaces – a rich tradition that stretches back to Moorish times. You find ceramic pictures everywhere in . They can be pious, historical, abstract, surreal - or just funny. This simple icon protected an alleyway in the old quarter of Alfama (above right), whilst a shop was adorned by an inquisitive monkey: 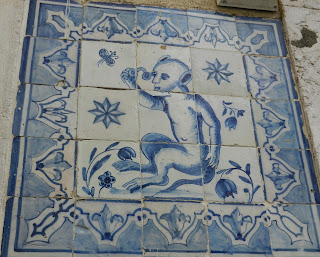 Historical personages were popular in the National Museum. Here's Catherine of Braganza, married to King Charles II of England (looking rather saucy), a curious armless Napoleon, 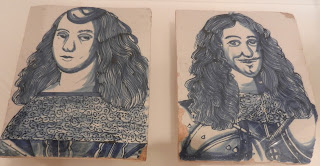 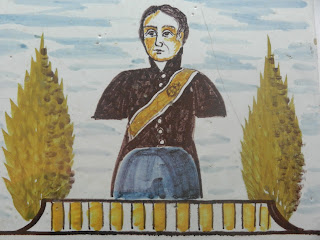 and, a more modern take, a version of a famous sketch of Portugal's great poet, Fernando Pessoa, beadily reading the paper: 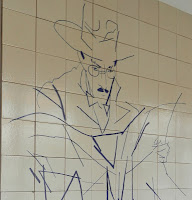 A seventeenth century fantasy depiction of a leopard hunt particularly caught my fancy - animals and themes from Portugal's colonial adventures seem to have provided rich subject matter for the tile artists. The hunters set out in pursuit of some rather portly leopards, who look as though they've spent too long eating pastries in Lisbon's cafes. The hunters are armed with nets and traps to snare their prey: 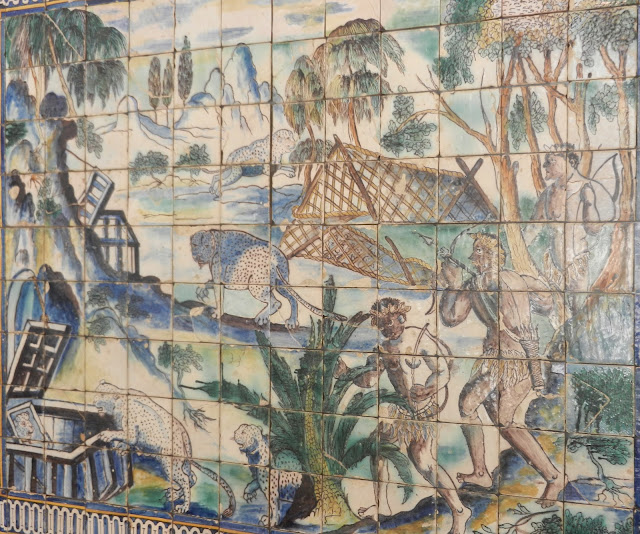 But their most cunning device is the mirror trap. The leopard approaches the trap, sees a rival leopard in the mirror, and presumably maddened with rage, springs into the trap to attack - the lid is snapped shut and the leopard is taken! 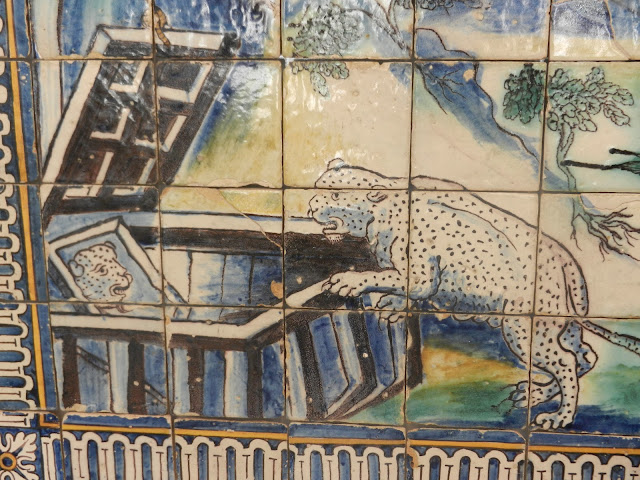 Posted by Roger Crowley Historian and Writer at 11:25 No comments: