A face in the dark

It’s been uniquely hot in England over the last few weeks – we wait a decade for a spell of good weather like this then I find myself spending much of my days in a cool darkish room in our three hundred year old stone cottage, writing. My companion on the desk has been this picture. It’s an image on a book mark for a book that I bought – hence the names of the authors visible on the section I’ve reproduced. I didn’t particularly choose to have it there but the desk tends to accumulate objects that take up residence – until it all gets too crowded and I shoo them off, but I like this face, and it’s survived the recent clearing back.

It’s a portrait of Vasco da Gama, painted at the very end of his life. I’ve seen the original in a museum in , which is surprisingly small. It’s an exquisite image. The face glows against the dark background; a gentle, almost serene expression, the beard caught by a soft radiance. The gold cross gleaming out of the blackness is that of the Order of Christ, ’s crusading order, the successor to the Templars who uniquely escaped persecution in the country by a crafty piece of rebranding just as they were being wiped out.


It seems to me the face of a man who has lived his life and come to terms with everything. The cross is evidently there as an emblem of his faith and deeds as a crusader for Christ. I have to say the meekness of the face rather clashes with the known facts. Da Gama enjoys a terrible reputation as the conquistador of the , guilty of some awful atrocities, possessed of a violent temper and not in the least tranquil. Maybe in old age serenity came upon him; maybe he was flattered in the painting. Whatever, he gazes calmly up at me. The days are hot. Outside the bees rummage the flowers. I write on.

Posted by Roger Crowley Historian and Writer at 03:21 No comments:

As becomes a turbulent battleground for the soul of modern I have found myself reading about its equally turbulent, exotic and frankly weird past.


I’ve been trying to skip read a chronicle covering the years roughly 1500- 1515 to discover how the sultan in reacted to the aggressive arrival of the Portuguese in the . The trouble is that the detailed accounts of daily life in the city are so fascinating that I keep getting distracted. It’s an extraordinary Arabian Nights world – violent, fantastical, prone to bouts of superstition and magic, obsessed with rituals, exotic pageantry and terrible deaths. It charts the dying years of the Mamluk dynasty who ruled much of the Middle East – , , the – for some two hundred and fifty years – a dynasty on the edge of collapse, like the last years of Tsarist Russian, before extinction at the hands of the Ottomans who marched in and killed the last sultan in 1517. It’s living on borrowed time – but vividly.

The writer, Ibn Iyas, captures everything. There are firework displays and processions to mark the great days of the Muslim year; the construction of scented palaces, adorned with fruit trees and aromatic plants, streams of running water and shady pavilions; the polo season is declared open in the hippodrome, a horse falls during the match, the state of sultan’s health is a subject of public interest (colic, diarrhoea). The seasons are marked by his change of costume from wool to white cotton. The rise and fall of ‘the blessed ’, on which everything depends, is obsessively measured at the ‘Nileometer’. Plague cuts a swathe through the city; an outbreak of bird flu kills all the chickens; earth tremors shake the minarets. Three people are trampled to death during a free handout of food to the unemployed. Law and order is, to put it mildly, something of an issue: a man kills his wife, puts her body in a barrel of tar and sets fire to it; robbers ransack a market – they are caught and torn in two; a revolt by the Bedouin is put down, a grand procession includes 800 heads fixed to spears; the sheik Ahmad ibn Muhamma is paraded on a camel then hung from the city gates… 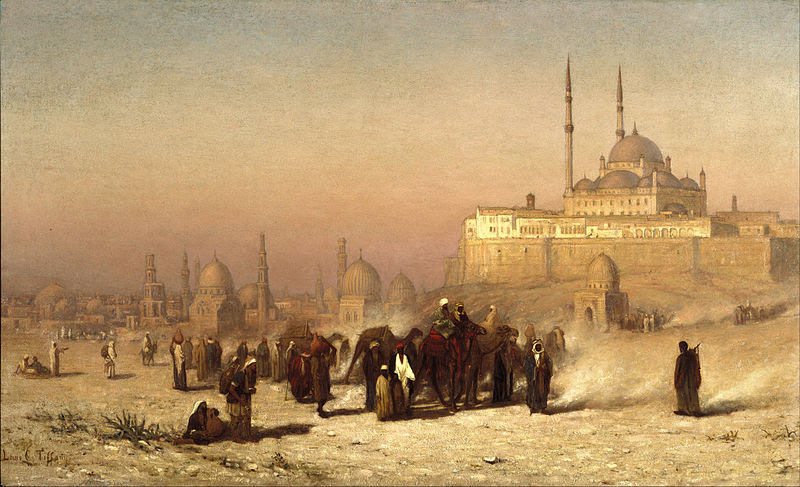 It’s a phantasmagoria of incredible vividness…two camels carrying flax brush the lantern hanging from a stall and catch fire. The terrified animals stampede with their flaming cargo and trample people underfoot, crashing through the markets, spreading death and destruction. A report from tells of an enormous sea creature washed ashore; the sultan writes to the governor asking him ‘to send this fish to , if it’s feasible.’ A dervish is hung. A Turk escapes in a borrowed uniform. Terrible tortures are inflicted on Badr al-din ibn Muzhir. The sultan’s performance at polo is judged mediocre. The Portuguese interrupt Muslim shipping and cause a shortage of turban material. A man has a dream that a huge treasure is buried under the pillars supporting a mosque, but he is unable to say exactly which one; the sultan orders the demolition of all the pillars; a huge crowd gathers to watch but the sultan then changes his mind - the dreamer is thought unreliable. A one year old elephant from is processed through the streets – the whole city turns out to watch, no elephant has been seen in the city for forty years. There are bloody quarrels among the black slaves. At night an eerie light is seen, shaped like the sail of a ship – there is no explanation. It’s a world of colour, passion, magic and dreams! 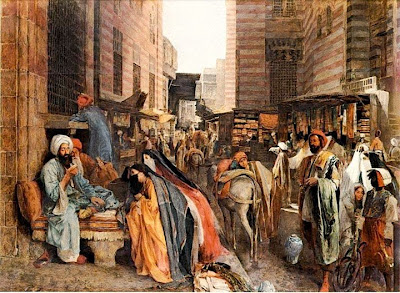 And ‘in the first days of this month, one heard of the death of Aziza bint Sathi, one of the most famous singers in , the marvel of the age. Her diction and her voice were admirable and were worthy of the poetic language (of the words). No other singer afterwards could be compared with her. No other chanteuse enjoyed such an appreciation among the nobles and grand functionaries of the state. This woman, whose reputation has been immense throughout , was over eighty when she died.’

I wonder what she sounded like. I’d love to have heard her sing.
Posted by Roger Crowley Historian and Writer at 06:00 No comments: