What did the Portuguese ever do for us?

I'm just off to Lisbon for a fortnight to do some research into the Portuguese voyages of discovery. I'm going to visit museums, talk to historians, inspect monuments, and the tomb of Vasco da Gama, go aboard a replica caravel - caravels were the ships with which the Portuguese first sailed round the Cape of Good Hope - and experience a great deal of very generous hospitality.

To catch up I'll just reproduce below an article from the old blog by way of deeper explanation.

'What did the Portuguese ever do for us?' to paraphrase the title of a series of historical TV programmes in the UK. The answer, as I'm finding out, is 'quite a lot'. My next project is a history of the Portuguese voyages of discovery - a change from the Mediterranean arena which has kept me at my desk for nearly a decade. I had a vague idea of following this thread at the end of City of Fortune. It was clear to the Venetians that Vasco da Gama's circumnavigation of Africa was potentially a huge threat to their business model, based on importing spices through the agency of Muslim middlemen via Egypt and the Red Sea. However the real push to this subject came from a near neighbour of mine, Pascal Monteiro de Barros, passionate about his country's history and highly persuasive. What I realised, with Pascal's input and some initial reading, was that the Portuguese exploration of the world - from Africa to India, Brazil to China - was an extraordinary story of bravery, brutality, imagination and innovation. In the nineteenth century, the history of Vasco da Gama and his successors was considerably better known than it is now. It has since been dimmed by the rise and rise of Columbus, especially in the USA, but as we survey the ever accelerating pace of globalization and ask ourselves where it started, the answer is - on the Atlantic seaboard of the Iberian Peninsula with the Portuguese.

In the wake of Da Gama, Portuguese navigators vaulted the globe. They were the imperial pathfinders, who provided the template for a wave of successors, such as the English and the Dutch. At the start of the sixteenth century Lisbon became, for a short while, the wealthiest city in Europe. The Portuguese empire connected the world and created a framework for global interactions. In time it would link the oceans, bringing firearms and bread to Japan and astrolabes and green beans to China, tea to England, pepper to the New World, Chinese silk and Indian medecines to the whole of Europe, and an elephant to the pope. It left a huge and long-lasting influence on the culture, food, flora, art, history and language of the globe. It marked the start of 500 years of domination by the West which is only reversing now. From a writer's point of view, this whole story is enriched by the fact that the Portuguese wrote a lot of vivid first-hand accounts – fantastic material to draw on.

For a sense of Portugal’s extraordinary imperial reach, watch this short video. Its haunting music also hints at the lasting nostalgia that imperial legacies leave behind.
Posted by Roger Crowley Historian and Writer at 22:14 6 comments:

The image that forms the header for this blog is a view from the mainland coast of across the straits to the of , near the mouth of the . Turkish now, for thousands of years it was part of the Greek speaking world. The , as they called it, has a deep place in Greek literature. It figures in Homer; its ruler Tenes was killed by Achilles during the long war for nearby Troy; and it was here, according to Virgil, that the Greeks retreated after leaving the wooden horse outside the city walls to await the success of their trick. It’s always been part of a contested frontier zone. The Byzantines, the Venetians, the Genoese, the Ottomans all successively fought for it; it featured in the Greek war of independence and was finally ceded to in the 1920s. The Greek population has almost all gone now. There’s a haunting memoir by Dmetri Kakmi about the departure of the rump Greek population towards the end of the last century.

Such off-shore islands lie dotted along the coast of Asia Minor – Lesbos, Chios, Samos, , and a scattering of smaller ones. They’re now the frontiers between and and have become militarized zones, patrolled on either side by jets and warships, though the heat has somewhat gone out of the confrontation in recent times. Once however they were linked closely to the mainland by trade and culture; they were highways down which merchants, travellers and ideas passed to and fro. Just behind the picture, on the mainland, lies the immense sprawling classical site of Alexandria Troas, named after Alexander the Great by one of his generals. passed this way, stopping at the city to preach – at such length that a young man seated in a window upstairs window fell asleep, dropped out of the window and died – to be miraculously restored to life by the saint. The landscape is scattered with remnants of this ancient place. Columns, probably broken whilst being transported by the Ottomans to incorporate in their palaces, stand upright in the calm sea. 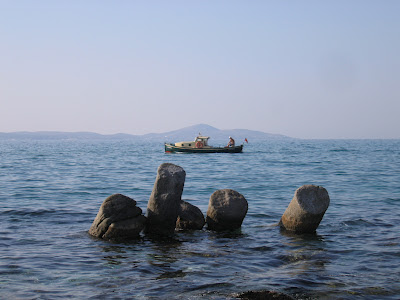 Posted by Roger Crowley Historian and Writer at 08:13 2 comments:

After a certain amount of thought I've decided to transfer my blog from my main website to Blogger, just to make it easier for people to track and follow. So this is just a post to sort out the visual details. Hopefully something more interesting will pop up soon.
Posted by Roger Crowley Historian and Writer at 02:49 No comments: