‘At the third gust the wind became so strong that it shattered our lateen yard down the middle, and snapped the Julia’s main mast. Great packets of sea rolled over us – it was stupefying to see.’
I’ve been writing about Vasco da Gama’s voyages to – small ships lurching and rolling in the enormous seas south of the ; the Portuguese shipwreck statistics along the African coast and the total disappearance of vessels swallowed up by the ocean were alarming.


To get some further imaginative sense of what it would be like to confront the ferocity of really big seas in a sailing boat I picked up The Last Grain Race by Eric Newby. Newby, out for adventure as a nineteen year old, signed up as a sailor on the Moshulu, one of the last sailing ships to carry grain from Australia, just before the Second World War.

Here’s Newby’s account of heading for in the heaviest seas in the world:


“The barometer fell and fell, 746, 742, 737 millimetres. The sun went down astern, shedding a pale watery yellow light on the undersides of the deep black clouds hurrying above the ship. It was extremely cold, colder than it had ever been, blowing a strong gale, force 9. Big seas were coming aboard. I felt very lonely. The ship that had seemed huge and powerful was nothing now, a speck in the Great Southern Ocean, two thousand miles eastwards of , three thousand from the coast of …to the south there was nothing but the Antarctic ice and darkness. She was running before seas that were being generated in the greatest expanse of open ocean, of a power and size unparalleled because there was no impediment to them as they drove eastwards round the world. She was made pigmy too by the wind, the wind that was already indescribable.


At this moment, for the first time I felt certain of the existence of an infinitely powerful and at the same time merciful god. Nearly everyone in the ship felt something of this, no one spoke of it. We were all of us awed by what we saw and heard beyond the common experience of men.”

The Portuguese have a proverb – if you want to learn to pray, go to sea.


Strangely the Moshulu still exists – she’s a floating restaurant in . 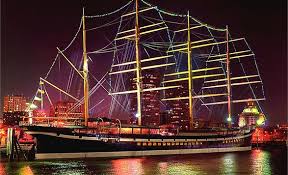 Posted by Roger Crowley Historian and Writer at 13:31