As it happens I had no time to see Suleiman the Magnificent (see blog entry of 2 September), when I was in Istanbul – I was at the start of a fortnight’s lecturing on Zegrahm Expedition’s circumnavigation of the Black Sea – a great two-week trip round the coast of Turkey, Georgia, Russia, the Ukraine, Romania and Bulgaria. Instead of Suleiman’s tomb I got to see Stalin’s get-away from the toils of oppressing the Russian people: his dacha outside Sochi.


Set in fir woods on the airy hills above Russia’s ‘Mediterranean’ coast – it was a fascinating insight into the man – a mixture of domesticity and paranoia in equal measures. A long low series of buildings around a verdant courtyard, protected by four concentric rings of security and painted green for camouflage – Stalin was taking no chances. 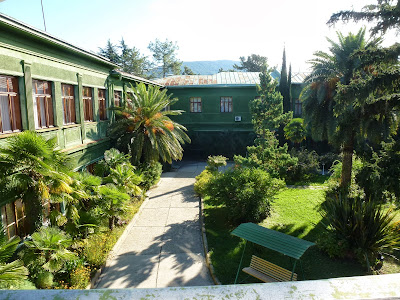 On the mountain above he ordered the erection of a tall look-out tower; in his working room he had a bizarre bullet proof sofa – the very last resort one would have thought and only of any use if being shot from behind – and concealed alcoves outside rooms for burly guards.
﻿

And yet the place also felt deeply pleasant. Unpretentious but beautiful wooden walls and ceilings, spacious verandas looking out into the forest where Joe and his family would while away afternoons around the samovar, a billiard table and chess board – I wonder who won all the games – an indoor swimming pool. A sense of deep tranquillity in the Russian woods. When it all got too much the family man and epic mass murderer would come here for up to three months at a time. To forget. 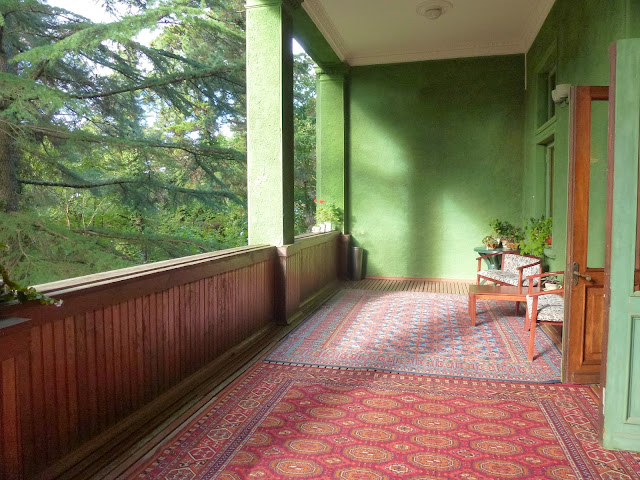 Posted by Roger Crowley Historian and Writer at 13:18