Scratchings on a rock

At present I’m writing a book about the Portuguese exploration of the world. Vasco da Gama’s rounding of Africa in 1497 stands as a pivotal moment in world history – the start of the long process of globalization which preoccupies us so much today – but his arrival in was no overnight breakthrough. It came on the back of half a century of slogging exploration of the African coast. In retrospect the Portuguese seemed indefatigable in their endurance and their willingness to push themselves over the edge of the known world. Men vanished in small ships and rough seas, or died of malaria and poisoned arrows on probes up the continent’s vast rivers, the , the and the , in search of an elusive short cut to the

There is no more poignant memorial to this process than a monument left by the sailors of the Portuguese captain Diogo Cao up the River Congo at the , a site so remote that there would be no further recorded European visitor for 300 years. Whoever came here in about 1485, sailed, or rowed 100 miles upstream from the sea along the mysterious and densely forested banks of this immensely powerful river. As they pushed their way east, the current increased in ferocity until they reached a rocky gorge, and the thunder of mighty waterfalls, a colossal torrent of water pouring out of the heart of . The Portuguese could sail no further. Undeterred they abandoned their ship or ships and scrambled ten miles over the rocks, in the hope of finding navigable water upstream, but the succession of rapids defeated them.

This venture is completely unrecorded in Portuguese chronicles. The only testimony is hidden on the rock wall of an overhanging cliff high above the crashing torrent, where the seamen left a carving. It shows the arms of King John II, the energetic Portuguese king who must have ordered this expedition. Next to it there is a cross and some names: ‘Here arrived the ships of the illustrious monarch Dom Joao the Second of Portugal, Diogo Cao, Pedro Anes, Pedro da Costa, Alvaro Pyris, Pero Escolar A…’

To the lower right and carved in a different hand, there is a second group of names: ‘Joao de Samtyago, Diogo Pinheiro, Goncalo Alvares + of sickness Joao Alvares…’ And in another place, just a Christian name: ‘Antam' [Antao = Anthony]

All these inscriptions seem broken off – their circumstances as ambiguous as a last entry in the diary of a polar explorer. They give us the names of the men who commanded the ships – Diogo Cao and the others by the cross; but the commanders were probably not present. It is likely that Cao sent the expedition upriver to probe the navigability of the and it is the men in the second group who actually made the trip. It is probable that both inscriptions were being carved at the same time; and both are incomplete, as if interrupted at the same moment. Evidently men were ill or dead – probably of malaria. There is no date. Were they too weak to continue? Were they surprised or attacked as they scratched away at the rock? No date is recorded; nor is there any other record of this probe into the heart of , which remained undiscovered until 1911. We know at least that some of the men must have made it back because one of them, Joao de Samtyago [], was a pilot on a famous follow-up voyage by Bartolomeu Dias, who rounded the for the first time in 1488. 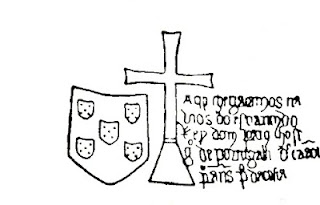 Posted by Roger Crowley Historian and Writer at 03:19